I had wanted to see this movie since beginning of summer when it was annouced. Not that I'm a fan of zombies but it looked like a fun movie to watch. It grew stronger as it got more interest in media and it became the highest sold movie.
Although it is supposed to be scary I found some scenes hilarious. But some things really annoyed me too, as they became so Korean, I wondered, I hope they can see that they do have a problem in the society. And not only look at it as "this is just a movie". Some scenes really showed how Korean the movie is. Not that it's bad but more, this needs to change!
I think the movie was well made and it was interesting to see it until the  end! Worth watching for sure. 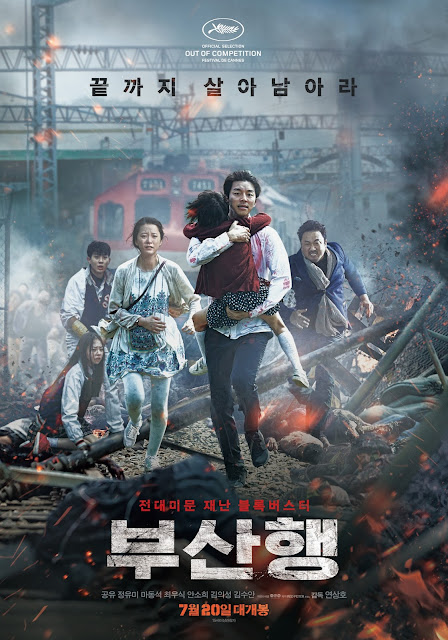 Story
Seok-Woo (Gong Yoo) is a fund manager in Seoul. He is separated from his wife and lives with his daughter Soo-An (Kim Soo-Ahn). Seok-Woo doesn't spend much time with his daughter or show affection to her. On the night before Soo-An's birthday, Soo-An insists on seeing her mother for her birthday. Seok-Woo has no other choice, but to take her to Busan. Early the next morning, they board the KTX train for Busan at Seoul Station.

Before the KTX train leaves Seoul Station, a zombie like girl jumps onto the train. The girl is infected with a horrific virus that is spreading like wildfire. Seok-Woo, Soo-An and the other passengers on the KTX train must now fight for their lives.

The world and me

This blog contains a mix of writing from all over the world!
Mostly about shopping, skincare, make up, food, music, travels and daily life.

I was born in S.Korea but grew up in Sweden. For the past 8 years I have mostly been travelling around Asia, I have also lived in Canada for six months and S.Korea for one year.

I love Tokyo, Seoul and Osaka (yes there's a difference between T and O) fashion! and always save money for my next shopping spree!

Not always grammatically correct but you'll most likely get the point.

Writing is in Swedish, English, Korean and/or Japanese..

Popular entries in this blog

This is who I am

C-Line
I love to travel, during the last couple of years I have mostly been to Asia - HK, Japan, Korea, Taiwan, Singapore.. I love Jpop and Kpop, follow many drama, variety shows and watch many movies.